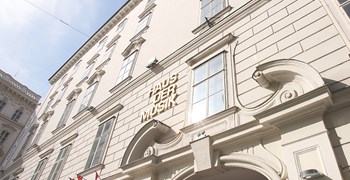 Haus der Musik is the first Austrian museum to have signed an international license agreement, enabling the creation of an interactive music museum based on the Viennese model. The interactive music museum "Casa de la Música Viena" is located in the capital of the Mexican state Puebla, about 130km southeast of Mexico City, and was inaugurated on January 13, 2015.

Among the guests were also the Austrian ambassador in Mexico, Eva Hager, the Mexican ambassador to Austria Luis Alfonso de Alba, consul Andrés Roemer, Esteban Moctezuma, president of Fundacion Azteca and numerous other high-ranking representatives of the arts, culture, politics and media.

The opening ceremony was accompanied by a concert of the young Viennese pianist Anna Magdalena Kokits who performed together with the orchestra and choir of the "Orquestas Esperanza Azteca". The new music museum was established on La Constancia Mexicana, an area which covers approximately 5ha and was once home to the largest textile factory south of the United States. The abandoned and landmarked factory had for many years already accommodated the youth orchestra initiative "Orquestas Sinfónicas Esperanza Azteca".

Much like Haus der Musik in Vienna, the Mexican "Casa de la Música" presents a wide variety of topics focusing on music and sound. The presentation is very much inspired by Haus der Musik Vienna, but has been adapted to embrace regional specificities. Unique installations such as the virtual conductor, the Mozart name game "Namadeus" or the multimedia theatre "virtostage" as well as the specific room design were transferred and adopted. The entire collection of exhibits of Haus der Musik was rebuilt 1:1 according to building plans, detailed concepts, material specifications and photos. One important addition in Mexico was a special exhibition space, which will be programmed with varying musical content. These temporary sound exhibitions will place a recurring emphasis on Mexican music.

The project was initiated by Simon K. Posch together with the Mexican diplomat, author, journalist and intellectual Andrés Roemer. The latter's grandfather had been forced to leave Austria in 1938 in direction of Mexico, where he embarked on a successful career as orchestral conductor.

The project "Casa de la Música Viena" was carried and financed by a Mexican PPP initiative. The actors involved are the state of Puebla, the federal government and its cultural section CONACULTA as well as the private investor FUNDACIÓN AZTECA, which is the foundation of entrepreneur Ricardo Salinas.
The project seeks to offer children and young people better perspectives and opportunities for their future through musical education. This is a major concern shared and supported by all partners involved, Fundación Azteca, Grupo Salinas as well as Haus der Musik Vienna. In Mexico the project will particularly benefit children and young people, but the idea is also to explore and expand cultural tourism. Lasting active bilateral exchange between Haus der Musik and its Mexican counterpart is foreseen.